A Beautiful, Sunny Day in San Bernardino as Fans Meet the Bruins

Yesterday, excited fans turned out in large numbers to watch their team finish up training camp in San Bernardino. Fans were treated to lots of great action, ice cream, and a chance to meet and greet this years players and coaches. I was one of them and below are some of my thoughts, observations, and pictures.

Share All sharing options for: A Beautiful, Sunny Day in San Bernardino as Fans Meet the Bruins

It has been a long training camp for the Bruins which started in San Diego with the Navy Seals and continued for 10 more days in San Bernardino. I was able to attend the two practices, last Saturday and yesterday, and saw much improvement in just one week. Yesterday, I met up with BLT_Bruin and another friend to enjoy a fun and exciting morning/afternoon with our team. Having attended practices for many years now, I do not remember a time when there has been so much excitement around our team. I sat near a young boy (about 10) who seemed to know every player's name and was so excited to see them. The crowd was large and knowledgable and decked out in UCLA blue. Not only has the crowd grown in size and knowledge, but so it seems have our players. Our players look stronger, bigger, faster, and more competitive across the board compared to those in the near past. As one observer commented to me, there used to be a few guys out there that looked like real college football players, now there is a whole team of guys who look like men.

After warming up, the team went right into running no huddle plays. Brett Hundley looked sharp and so did the receivers. With Brett in, every play in the first round was a success. All day Brett was very accurate hitting a variety of receivers. I noticed a couple of things about Brett which are really good news: 1. He threw the ball out of bounds on one play when the receivers were covered; and 2. He has gotten a lot better at not signaling his passes. He has been working with the GoPro (although not yesterday) and it seems to be paying off. I remember one play when I was sure he was going to throw the ball in our direction, but instead he went to the opposite side of the field.

As for the receivers, I think we have a really impressive group of young men. Shaq Evans had one of his patented one handed catches in the end zone against really good coverage. Devin Fuller and Devin Lucien were steady and fast. It was especially fun watching them go against Randall Goforth. It was great competition. Darius Bell continued to impress. I don't know what he did in the off season to improve, but he can shake off any DB with his cuts and deception, and his hands are steady. All of the receiving corps and RBs showed a kind of consistency catching a ball that two years ago I could have only dreamed of. No longer do you see the dropped passes (well rarely) that seemed to plague our football team just a short time ago. The players are running good routes, catching, and hanging on to the balls with defensive men all over them. When the ball was not caught, it was almost always because of an outstanding defensive play, like whenFabian Moreau jumped in front of Shaq and took the ball the other way for a TD.

One player that really caught my attention was Darren Andrews. He was fast, strong, consistent, and incredibly impressive. I think Andrews is going to emerge as a really important player for us. 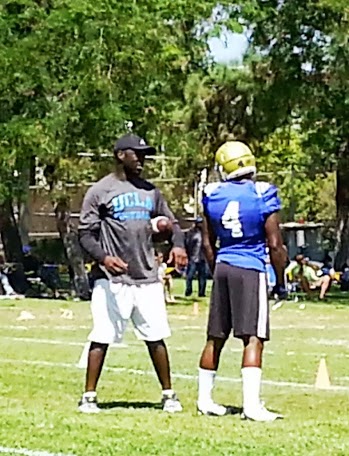 (Darren Andrews getting some pointers from DeShaun Foster. via lh4.googleusercontent.com)

Nate Iese was unstoppable at the Y. He knew how to box out the coverage to get himself in the best position to get the ball and Jordan Payton also was able to use his body to create space. Even Jerry Neuheisel got into the act starting in the back field and stretching out to make a great catch on a roll out.

Asiantii Woulard throws a really nice, deep ball. Watching him and Hundley taking turns throwing deep passes in drills was a thing of beauty. Both threw deep passes with ease and hit the receivers in stride. They were consistent and those around me were really enjoying watching this "clinic". Hundley took almost all of the live snaps, so it was difficult to evaluate the other QBs in game situations.

Compared to a week ago, the DBs have advanced. Last week many of them seemed a step or two behind. Yesterday was a different story. With very few exceptions, every ball was contested. The DBs also were able to ride receivers out off their routes which is something I wasn't seeing last week. This young group seems to be working incredibly hard and learning fast. Last week I came away concerned about the secondary. Yesterday I felt much better about them. Dietrich Riley was working a lot with them and at one point I heard him instructing our DB coach as to what needed to be done differently. Everyone out there is really working together to help this team excel. 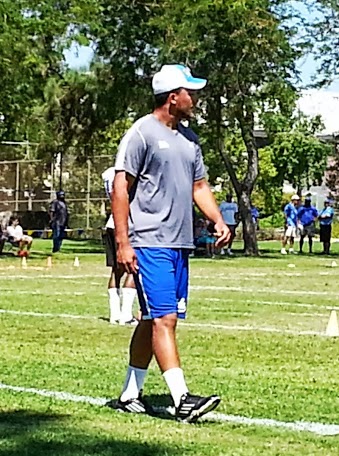 A couple other quick notes on practice. Damien Thigpen got a lot of reps and looked like his old crazy fast self. He has such amazing speed and it showed. When I got to speak with him after practice he said he was working hard to be able to play soon and felt ready to go. Jordan James had some nice runs, getting through some nice holes created by the offensive line. Myles Jack was not only solid at line backer, but was added to the punt return rotation and did quite well. I think he would be difficult to bring down. And it was clear that this guy was really impressed: 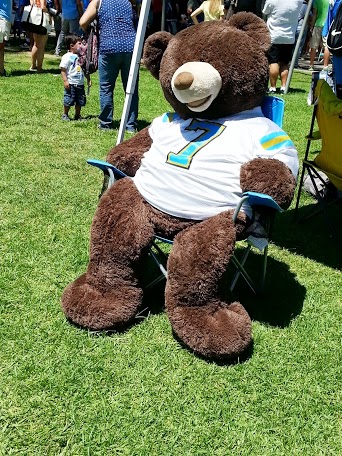 (Thanks to this Bruin fan for letting me post this. via lh5.googleusercontent.com)

After practice the players came over to the fans and spread out on a neighboring field. I stated above that our players really look like men now. But equally important, they act like real men. The players were so polite. Every player I approached thanked me for coming out to watch them and support them. Even in the hot sun after practice, they smiled and took their time to speak and sign autographs with young and old. I am so proud of these men, not only for their talent and hard work on the field, but for their manners, graciousness, humility, and for their true appreciation for being Bruins. They may be stars and stars in the making, but they made every fan there feel like we were the stars. And the best evidence of that can be found in the best picture of the day. What a beautiful moment.

For those who missed it, Telemachus has some great video of the action as well as a panoramic view of the happenings here. For those of you who want to read more about camp and see videos that we have found around the web; all of our notes, threads, videos, and comments can be found in our San Bernardino Watch section here. The San Bernardino Sun, care of Jack Wang has some nice shots of yesterday's action, including the crowd. If you were out there yesterday please add your thoughts and comments to this very incomplete and biased post below. And if you have pictures that you would like to share please send them via twitter @bruinsnation. Also, you might want to share your guesses for the upcoming season here.

Hope to see you all at a game or in a game thread! Go Bruins!