While we wait for the Bruins vs. the Longhorns, here's your open thread for Saturday morning/afternoon college football action including #12 Georgia at #24 South Carolina and Wyoming at #2 Oregon. We also have some good reading about our Bruins football team and players.

Week 3 is a bit of a lull.  ESPN Gameday will actually be in Fargo, North Dakota. The three-time and defending FCS champs, North Dakota State Bisons play Incarnate Word (I kid you not -- go here for their Wikipedia page).

Back to Division 1, the game of the day is #12 Georgia (2-0)  at #24 South Carolina (1-1) at 12:30 PT on CBS.  This game can potentially decide the SEC East. It's a must-win for preseason SEC East favorite South Carolina after their surprise beat down by Texas A&M at home in their season opener.  Here's Yahoo' Sports' preview.

In the PAC-12, first up is Wyoming at #2 Oregon at 11AM PT on PAC-1, and you can catch Illinois at Washington at !PM PT on Fox.  Here's Athlon Sports' preview of today's PAC-12 action.

As for our Bruins, "Houston... the eagle has landed".  Okay so they're not in Houston and they flew on Virgin Airlines, but given the strategic introduction planned for the football team to "Jerry World" and the size of the place, they might as well have landed on the moon.  Angus McClure wasted no time sending proof back to earth that the d-line had indeed landed: 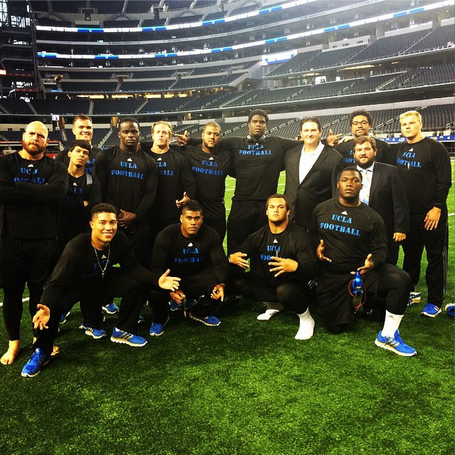 Speaking of the  d-line, Jack Wang has an interesting article in The Daily News on how the defense is not worried about racking up the sacks.  Instead the priority is to pressure and fluster the quarterback (so much for our pre-game guesses):

But I'm glad our guys are still hungry to get some:

Odighizuwa said. "But at the end of the day, you do take pride in getting after the quarterback. You’ve got to figure out a way to get it done, no matter what."

Fox Sports had an incredible article about the Quessenberry brothers and the battle the eldest, David, is waging:

A former standout and captain at San Jose State and a sixth-round pick in the 2013 NFL Draft, David Quessenberry was diagnosed with non-Hodgkin's T-cell lymphoblastic lymphoma in June. He’s currently undergoing the fifth of 10 rounds of chemotherapy that are scheduled to end this winter -- if everything goes according to plan, that is, and so often, with cancer, it doesn’t.

This will be David's first time getting to watch Scott as a Bruin and Scott is really looking forward to seeing his brother:

Huge thanks to UCLA_beer & mathematics for bringing this to our attention.

Nine of our Bruins will be playing today in their home state.  Among them is Caleb Benenoch with as many as 30 friends and family attending.  ESPN has a fun article about Caleb, his football career, his love of UT football, and his father who lives in Nigeria, from where Caleb emigrated when he was 8.  It looks like we are very lucky that we call futbol, football:

The lineman’s road to Los Angeles and to this game wasn’t exactly conventional. Benenoch is the son of Nigerian ministers and emigrated with his family to the United States when he was 8. He started playing football at 9 by accident – his mother thought she’d signed him up for fútbol.

I also hope that Caleb's dad has learned that offensive lines win championships:

Fox Sports also has a great article on Devin Fuller and his mom, Cindy Mizelle who was touring with Luther Vandross while pregnant with Devin.  It looks like Devin got to spend a lot of time on the road with mom as a youngster:

According to Mizelle, Vandross always encouraged those touring with him to bring their children along for the ride. He went so far as to set up a nursery on the back of tour bus, prior to and following the birth of each of Mizelle's three children.

Mizelle will be at the game on Saturday cheering on our Bruins.  If you listen carefully, you just might hear her. (HT once again to UCLA_beer & mathematics.)

Chris Foster also has a story today on Coach Mora stressing a "sense of urgency" in today's game. I think we're all feeling that sense of urgency as well!   Ryan Kartje of the Orange County Register has a really beautiful article about Nick Pasquale, his roomies on Midvale Avenue (Carl Hulick, Tayler Lagace, and Colby Cyburt), the fun they had together, and how these best friends cope with Nick's loss:

"Nick was the first person to take me surfing," Taylor said. "So literally every day I would go to the water by myself. When I was out there ... I felt like I was out there with him."

While UCLA is the away team at this "neutral site", meaning they cannot bring recruits to the game, the coaches didn't waste Friday night.  While Adrian Klemm and Jeff Ulbrich were looking at some big targets, Eric Yarber had his eyes on a 3* wide receiver:

Now, back to Saturday College Football:

Here's the full Saturday schedule.  This should get you through the day until 5PM PT!