The Bruins and Titans have emerged as the clear-cut top two programs in Southern California college baseball, but only one can advance to the College World Series.

Share All sharing options for: UCLA And Fullerton Renew Battle For SoCal Supremacy In Super Regionals

UCLA was down to their last out. Their season, at that point the best season in school history, was about to go down in flames. Of course Cal St. Fullerton would be the team to end their record-breaking season. This was still Bruins baseball, where decades later the Titans were still the team crushing their dreams at every turn.

Then the ball came down on the other side of the fence and the entire UCLA baseball program changed. The crowd at Jackie Robinson Stadium exploded, celebrating the one swing that turned the Bruins from perennial underachievers and the ugly stepchild in Southern California to Fullerton and USC into a a regional power themselves.

The Bruins would go on to defeat the Titans in 11 innings before a dominant win the next day to earn their third trip to the College World Series in school history. Two years later, they were back in Omaha, giving them as many College World Series appearances in three years as they had in their entire history to that point.

Now the Bruins and Titans are set to square off again in the postseason for the first time since that 2010 meeting that changed the face of the UCLA program. The Bruins have now left USC and any other California program in their wake, except for Fullerton. The two teams are the face of Southern California college baseball, and college baseball in the state for that matter. They aren't just local powers, but national powers.

They are also different programs than they were three years ago. Rick Vanderhook was the Bruins' top assistant coach in 2010, a well-respected coach who built his reputation under George Horton at Fullerton and was the presumed successor when Horton went to Oregon, but the Titans passed him over and he went to Westwood. He helped turn the Bruins into the program they are now, but he left UCLA a year ago to rejoin Fullerton last year -- as the head coach.

UCLA and Fullerton look nothing like the programs they were in 2010, and that makes this a titanic match-up. They are the California heavyweights, national players and chasing a national title, who will meet at Goodwin Field this time around. But one thing remains the same -- two teams, one spot in Omaha and three games to sort it out.

This Super Regional will feature two of the best starting rotations in the country, which is to be expected for two programs that are built around their pitching. 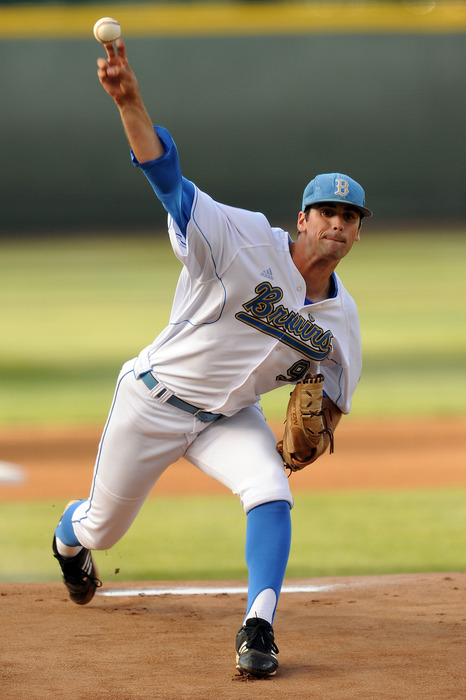 Adam Plutko is 5-0 with a 0.96 ERA in five career postseason starts

UCLA is led by Adam Plutko, a junior who has been phenomenal in the postseason, where he is 5-0 with a 0.96 ERA for his career. Nick Vander Tuig, who went 11-4 with a 2.51 ERA this season, will throw on Saturday and while he struggled last week, he showed his growth from the previous season with his ability to work six innings without his best stuff to keep the Bruins in the game. Grant Watson will wrap things up for the if necessary Sunday game with his staff-worst 8-2 record and 3.22 ERA. That is a testament to how good the Bruins' weekend starters are, and he will come into this weekend with plenty of confidence after tossing seven one-hit innings in his first career postseason start last weekend.

Fullerton is one of the few teams in the country that can match the Bruins' starting pitching and amazingly, they do it with two freshmen at the top of their rotation. But the Titans' young staff didn't show their youth in the slightest last weekend, going 25.1 innings, giving up two uns, striking out 20 and most impressively, not walking a single batter.

Justin Garza went 12-0 with a 1.92 ERA and 89 strikeouts this season, attacking batters with a good fastball, but it's his changeup that sets him apart. It's absolutely filthy and a knockout pitch that he can use against righties and lefties. Thomas Eschelman will start on Saturday and he went 12-2 with a 1.59 ERA on the season with a .205 batting average against identical to Garza's, but while his freshman counterpart relies on great stuff, Eschelman turns average stuff into something special with amazing command. Grahamm Wiest, the Titans' Sunday guy, is a sophomore who went 9-3 with a 3.27 ERA this season so while he isn't as good as the top two, he is still plenty good thanks to a fantastic sinker.

Edge: Fullerton will have a better starting rotation than any team they play this season, so long as Garza and Eschelman remain ignorant to the fact that they're freshmen. At this point in the season, it's tough to imagine that anything will change in that regard, giving the Titans the advantage.

UCLA has some serious concerns about its offense after managing a measly .249 during the regular season, but they showed well in the Regionals with 17 runs in three games. That's not a huge offensive explosion by any means, but it is enough to win the Bruins their fair share of games with their pitching. 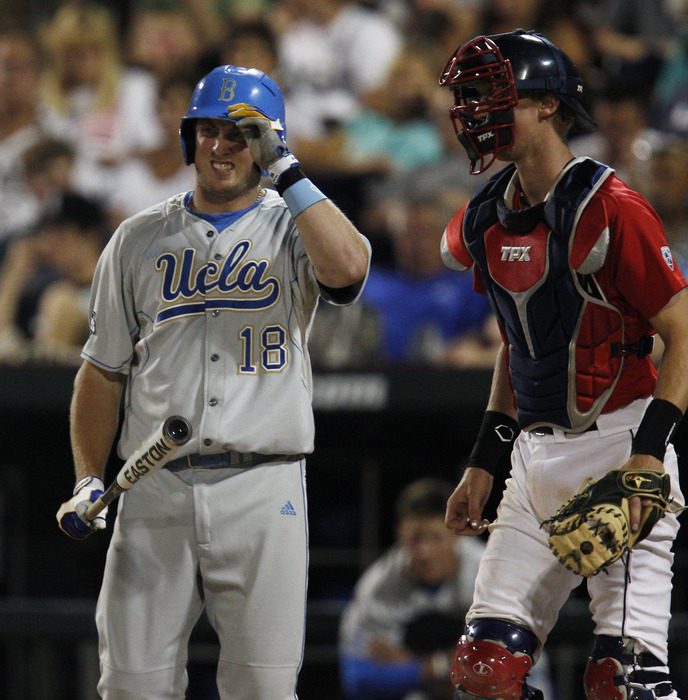 The Bruins have struggled to get production from first base and the corner outfield spots this season, all places where most teams have run producers, but they definitely got it last weekend. Pat Gallagher collected Regional Most Outstanding Player honors, Eric Filia joined him on the All-Regional team and Brenton Allen stepped up as well. Unsurprisingly, as those three hit, so did the Bruins.

The question for the Bruins is whether they can muster offense without the benefit of the base on balls. UCLA is short on power, but they do an excellent job of working counts, manufacturing runs and getting into bullpens, sometimes to their detriment. They won't have the luxury of leaning upon that this weekend with the way Fullerton pounds the strike zone so they need to put their bats to work.

Fullerton hasn't had the same offensive problems as the Bruins, hitting .285 as a team with 35 home runs, compared to just 19 for UCLA. They are a big, physical offensive team that uses all feels and has a similar, pitch-taking approach to UCLA so the Bruin pitchers will be challenged to throw strikes.

Michael Lorenzen leads the Titans' offense, hitting .335 with seven home runs and a team-best 53 RBI. He's the catalyst for Fullerton, but he has plenty of help. J.D. Davis hit .327 with 49 RBI and Carlos Lopez hit .335. But the Titans' offense has always been filled with guys like Richy Pedroza and Jake Jefferies. Neither of the two put up eye-popping numbers, but they move guys around and help manufacture runs. The concern for Fullerton is that they can struggle against right-handed pitchers, which bodes well for a UCLA staff that is all right-handed except for Watson.

Edge: UCLA tries to do a lot of the things that Fullerton does, but they don't have a hitter like Lorenzen or Davis and don't execute as well. The Titans are a well-oiled offensive machine. 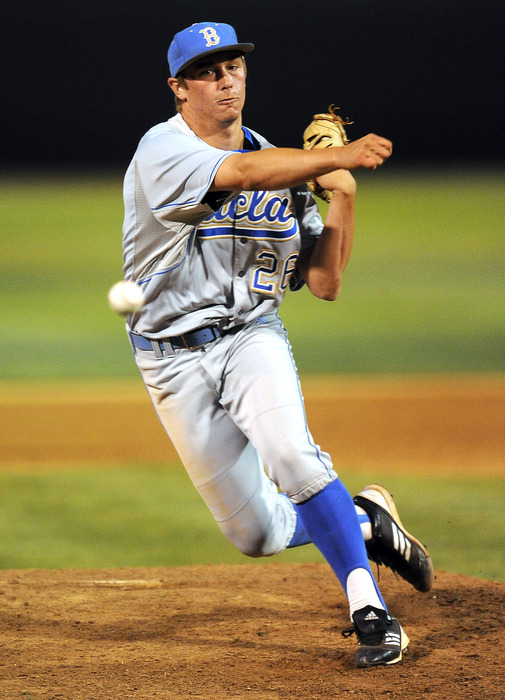 San Diego head coach Rich Hill said last weekend that the UCLA bullpen "rivals any bullpen at any point in college baseball history." That may be hyperbolic, but there is no doubt that the Bruins have an incredible bullpen. David Berg has 20 saves, a single-season school record, and was named Pac-12 Pitcher of the Year thanks to the best ERA in the nation at 0.81 in 67 innings. But Berg is hardly the only arm in the UCLA bullpen, with Zack Weiss (2-1, 2.37 ERA) and James Kaprielian (0-0, 1.46 ERA) working the seventh and eighth innings before him, giving the Bruins a trio that truly turns games into six-inning contests.

Fullerton's bullpen doesn't have someone like at the back end like Berg, but nobody else in the country does. Lorenzen is also the Titans' closer and brings a mid-90's fastball and great slider, which helped him pick up 19 saves. Fullerton has the luxury of turning to any combination of Koby Gauna (4-1, 2.60 ERA), Tyler Peltzmeler (3-0, 0.59 ERA) and Willie Kuhl (1-1, 3.38 ERA), giving them plenty of depth and from both the right and left sides.

Edge: Both teams have great depth in the bullpen and have relievers that can rival any in the country, but Berg's dominance, durability and ability to get six or even nine outs at the end of the game sets the UCLA bullpen apart. 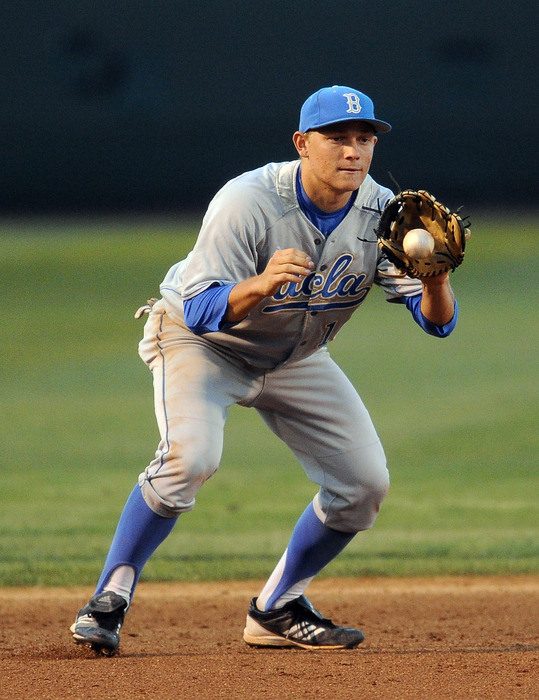 UCLA features the second-best defense in the Pac-12, with athleticism all over the park. Brian Carroll has tremendous range in center field and Pat Valaika was the Pac-12 Defensive Player of the Year, giving the Bruins some excellent play up the middle, while Kramer is as good of a defensive third baseman as there is and Filia is an excellent defensive right fielder. The questions for UCLA are in left field, where Allen's arm isn't great, and at second base, where Cody Regis' range is limited, but the Bruins have a fly ball pitching staff, which plays into the UCLA defense's strengths.

While UCLA leans on Carroll in center, Fullerton leans on Lorenzen, who is as good of a defensive center fielder as there is. He has tremendous instincts, gets great jumps and has a cannon for an arm. The Titans have a senior in Pedroza at shortstop and a much-improved junior in Chad Wallach behind the plate, giving them a really strong, experienced spine. Vanderhook also has a defensive weapon in Matt Orloff, who comes off the bench and really strengthens their defense late in games.

Edge: As good as Carroll is, Lorenzen is on another level, but the Bruins' left side of the infield may be the best in the country. Both teams are great defensively and there isn't much to separate them.

These two teams are very similar stylistically and their strengths mirror each other, but Fullerton has a definite advantage offensively and they get to play this series at Goodwin Field. The Titans also present a bad match-up for the Bruins, who normally thrive against teams they can out-execute by taking pitches and capitalizing on errors, only Fullerton's pitchers throw an absurd number of strikes and rarely make defensive mistakes. UCLA's pitching gives them a chance in any series, even against a top three team like Fullerton, but the Titans have to be the favorites this weekend.