If UCLA is going to repeat as national champions, they're going to do it the hard way.

Share All sharing options for: UCLA baseball has plenty of obstacles in bid to repeat as national champions

UCLA baseball is back, and this time it has a national championship in its trophy case.

At this time last year, UCLA was an emerging national power that was finally making good on their endless potential, but were still looking to make the jump to the elite, which only comes with one thing -- a College World Series title. Now they have it and no conversation of the top programs in the country is complete without UCLA. 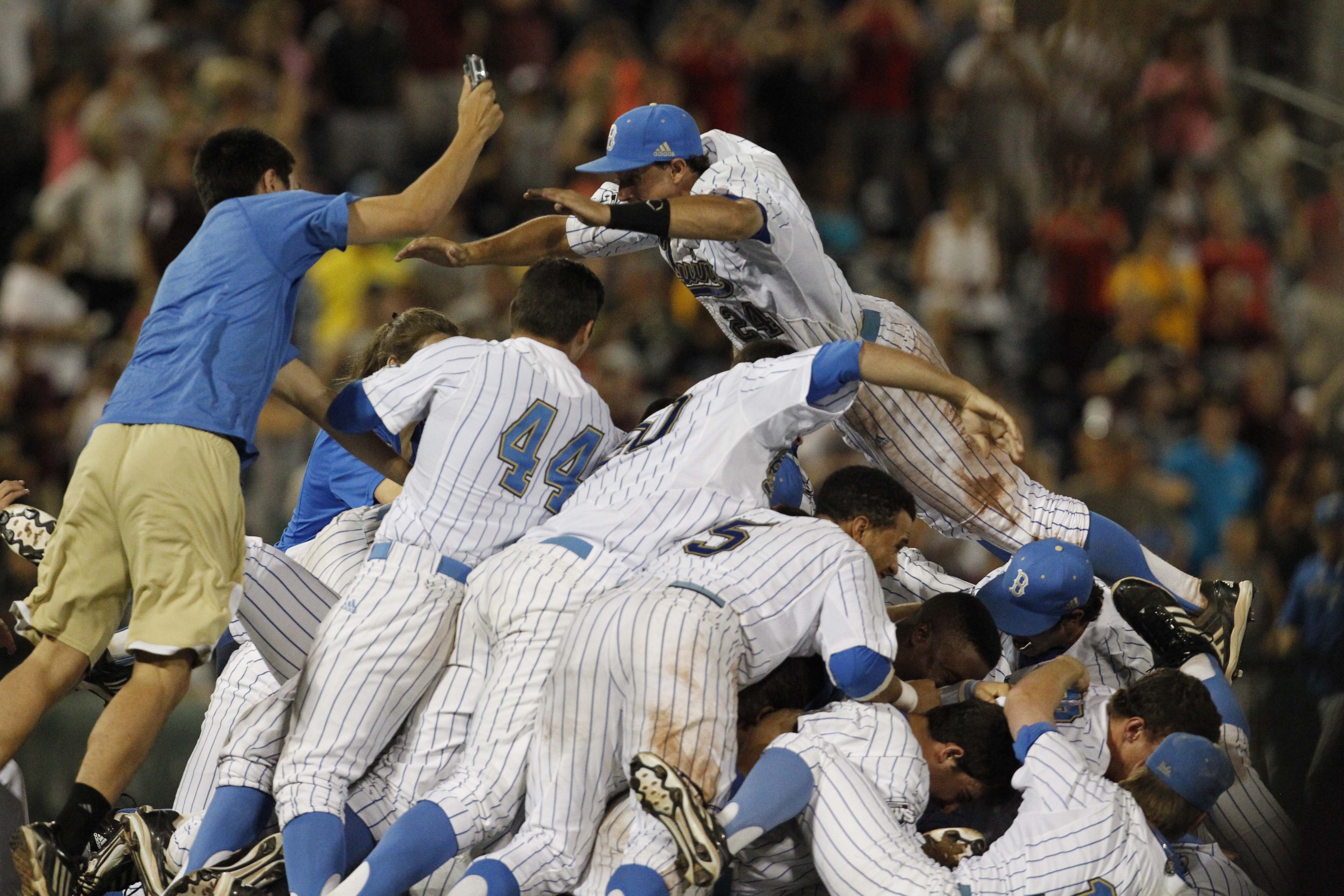 Now comes the hard part -- staying at the top.

That's not to say the Bruins have to repeat as national champions, they just need to be in the mix, just like the rest of the the best programs in the country do, and as UCLA has done by advancing to the College World Series in three of the last four seasons. Year in, year out, they have a shot to be the last team standing in Omaha, something the Bruins would have to do again, but this time with a target on their backs.

Keeping your spot among the nation's best is always a challenge, but it was going to be a little tougher for UCLA this season. Adam Plutko, Nick Vander Tuig and Zack Weiss departed, leaving the Bruins without their entire weekend rotation from last season, while Pat Valaika took his golden glove and leadership to the pros along with Cody Regis. The Bruins had some holes to fill.

Reloading isn't a new challenge for UCLA, or any top program for that matter, but the task proved tougher than the Bruins could have imagined after new year. Eric Filia was ruled out for the season with a shoulder injury that will require surgery, robbing the Bruins of their projected top hitter. Kevin Kramer also succumbed to injury, which may sideline him for the year. And just to make matters worse, Kevin Williams will not be able to play until March as he also battles injury.

UCLA started the fall thinking they would have to replace their Friday, Saturday and Sunday starters, shortstop and second baseman/DH. Now, as the 2014 season gets ready to start, they have their right fielder, second baseman and new shortstop missing too.

Finding new arms isn't a problem for UCLA, and it never is under John Savage. James Kaprielian, who had the most electric stuff on the team last year, is ready to take the ball on Friday nights. That he has almost impeachable makeup to go along with a 94 mph fastball and great slider makes him an easy choice for the role, even if he hasn't started as a collegian after spending his freshman year in the bullpen. Meanwhile, Watson has 18 wins in two years, including one in Omaha last year, so he's as good a Saturday guy as you'll find in the Pac-12. There is more of a question mark on Sundays, when Cody Poteet will take the mound. He has a low 90's fastball and devastating curve, but command issues made him inconsistent as the midweek starter last year so there will be concerns about the sophomore in the opening weeks of the season. 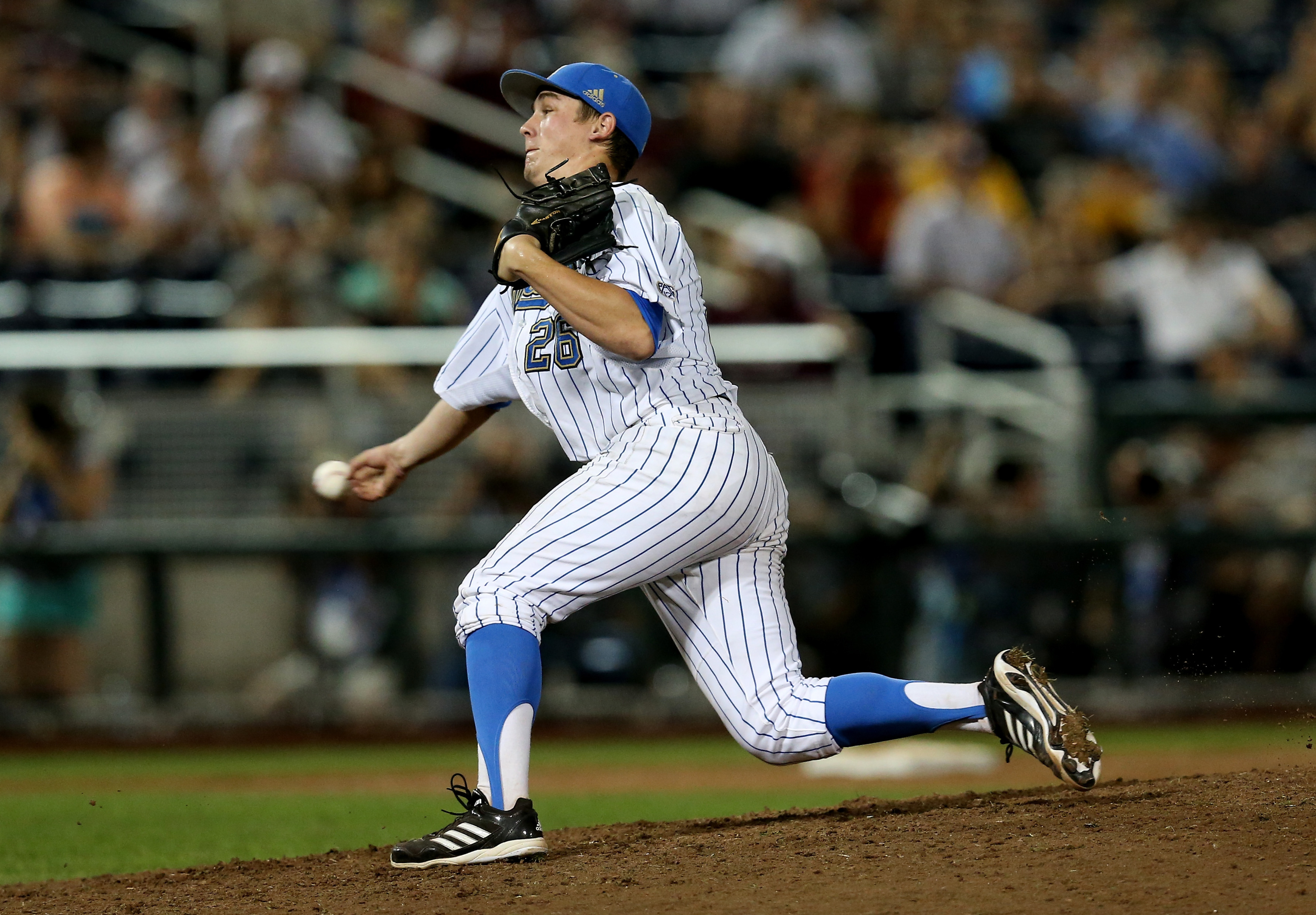 With 101 appearances in two years and the NCAA single-season saves record, David Berg is the best reliever in the country and the best to ever put on a UCLA uniform. (Photo Credit: Stephen Dunn)

Backing up the weekend staff is David Berg, the most used, durable and best reliever in the country. He set the NCAA single-season saves record a year ago and has 101 appearances in two years so there is no concern on the backend, while his low stress submarine approach also allows him to work multiple innings. The question is how UCLA will get him the ball if the starters don't go seven innings, especially on Tuesdays, when Scott Burke figures to take the ball as a freshman. Hunter Virant will miss the season as his lower back continues to give him fits, leaving Nick Kern, Jake Ehret and Max Schuh to get Berg the ball. Kern, a converted shortstop, had a great fall and figures to get the setup role, while Schuh is the lone lefty and will log much of the seventh inning work.

If anything is clear, it is that the pitching staff will have to be great because the offense is, once again, limited.

Last year, the Bruins were the worst offensive team to win a national championship and they didn't figure to be much better this season, but they planned to manufacture runs just like they did in Omaha. Get a man on any way possible, move him over, put pressure on the defense and wait for the key hit. It's the best option UCLA had and it was good enough to win a national title.

This year figured to be more of the same, although Filia was supposed to be at the heart of the lineup dependent on key hits, something he came through with time and time again in the College World Series. Kevin Kramer wasn't supposed to be limited either.

UCLA is set behind the plate with Shane Zeile, whose transition to catcher last season went better than anyone could have anticipated. He was excellent and only figures to get better this year, but he'll have to better his .226 batting average and at least double his 20 RBI total from a year ago. He has a good swing and power potential, now he has to tap into it.

Offense shouldn't be a problem at first base, where the Bruins have Pat Gallagher and Luke Persico. Gallagher was fantastic in the second half of the season and even better in the postseason, battling .351 while also capturing Regional Most Outstanding Player honors. He gives the Bruins a bit of power, while Persico is a freshman converted outfielder who provides a right-handed option to the left-handed Gallagher. Freshman Dominic Miroglio, who is a catcher by trade, but has gotten work at first as the Bruins try to find a way to get his bat in the lineup so he could also get into the mix. 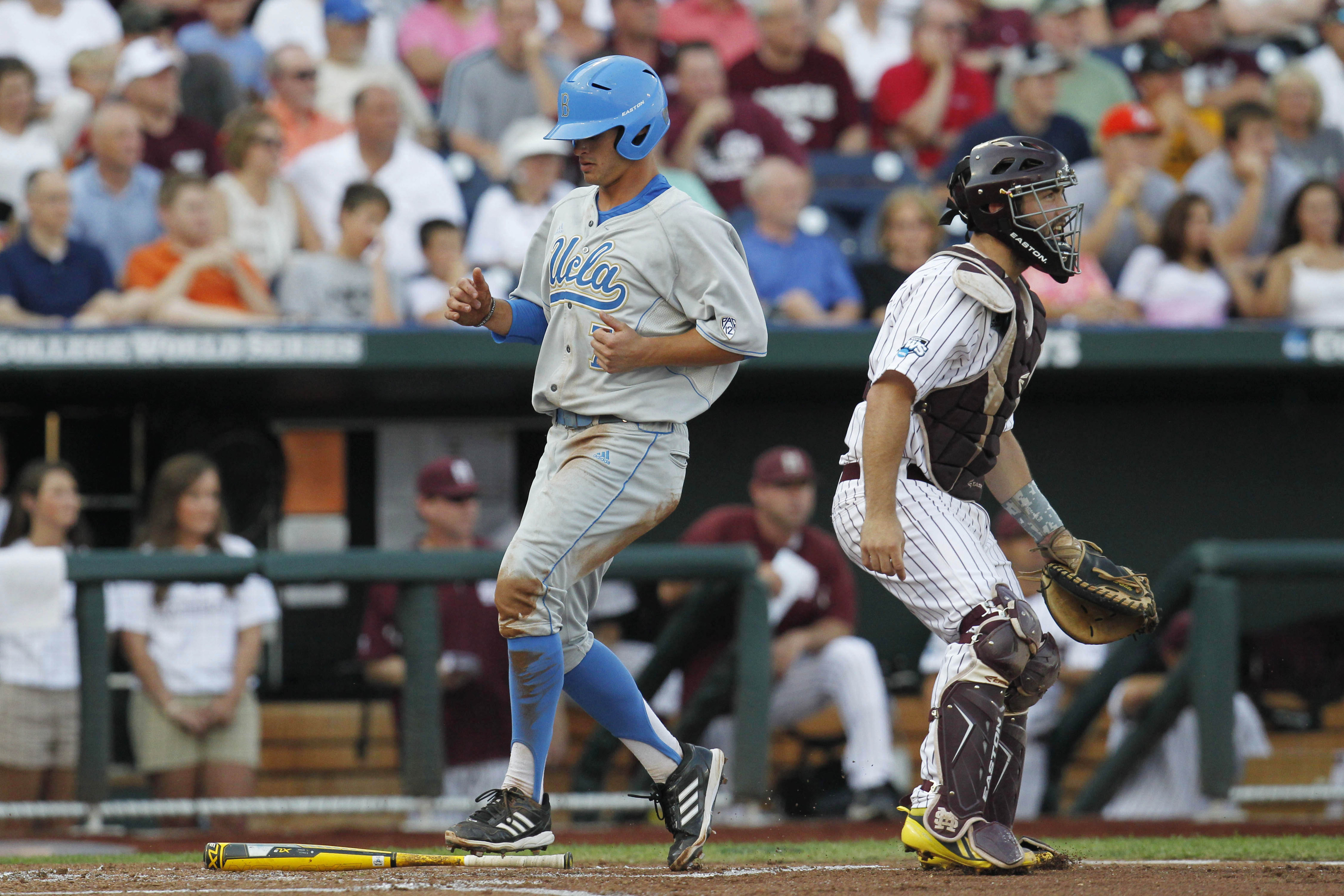 Kevin Kramer will make a decision soon on whether to undergo season-ended surgery. If he does, he would leave a giant hole both up the middle and in the lineup. (Photo Credit: USA Today Sports)

But as many options as the Bruins have at first, they have that few up the middle. The draft ravaged their freshman infield class, especially up the middle, and left them thin before the injuries to Kramer and Williams. Now they have to count on Trent Chatterton, who hit .257 in 2013, and Brett Urabe, who hit .083. Both will have to make major jumps, and the Bruins will have to keep their fingers crossed that Williams can return to his junior form (.302 batting average) when he's healthy.

But if that doesn't scare you enough, consider this: after Chatterton and Urabe, the Bruins don't have another natural infielder until Williams returns.

Things look better at the hot corner, where Chris Keck bring a huge arm and some power potential, although it will be his first year starting. He hit just .186 last season, but did manage 10 RBI and five extra base hits in just 70 at-bats so there is reason for optimism.

The outfield will be anchored by Brian Carroll in centerfield, who has an average bat, but does a tremendous job of working counts, drawing walks and especially causing havoc on the base paths, having led the Pac-12 in stolen bases last year. Flanking him on the right will be Christoph Bono, another first-year starter who is hoping to add some offense to his game. He hit just .216 last year, when he was used primarily as a defensive replacement, but with 27 strike outs in 74 at-bats, he has a simple path to success -- put the ball in play.

Filia was expected to start in right with Bono in left, but now that Bono is sliding across, left field is up for grabs. Ty Moore is the incumbent of sorts, having played some last season as a freshman, but he'll have to better his .219 average from a year ago because he is a marginal defensive player and has tough competition in Brett Stephens. The most highly touted player in the freshman class, Stephens had a monster summer in the West Coast League, being named to the All-Star Game, and has the chance to be one of the conference's best freshmen.

UCLA's prospects don't look as good today as they did in the fall, but all hope is not yet lost. Savage and Co. have won Pac-12 titles by coming out of the gates flying, have come on late to capture the conference title and made it to Omaha after spending the first two months piecing together a team that, on paper, wasn't good enough.

This Bruin team probably won't come out of the gates flying. They probably won't win the Pac-12 either, with the Oregon and Arizona schools good enough that the Bruins would have the little room for error that they will probably need in March and April, but UCLA has made more with less before.

Just look back a year ago -- UCLA still wasn't elite and they didn't have the offense to change that.

At least that was the common wisdom until they were the last team standing, national champions.