Well it looks like pressure is getting to Dan Guerrero. Just a bit at least. The worst athletic director in the country tried to backtrack in his weekly "word from Westwood" tonight by saying that Bruins are going to wear the ugly Adidas uniform only for one game in the tournament (ht uclaluv). Dan is trying to do damage control by suggesting that it's not going to be as much of an abomination as those blue zubaz shorts as the Bruins are going to be coming out in our home whites: 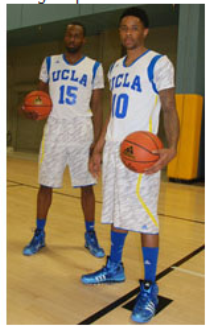 Guerrero pathetically tries to hide behind the bad decisions of other athletic programs by pointing to Kansas and Notre Dame. What he conveniently left out was Michigan (and NC State) said no to these unis, which as noted by LongtimeBru and snorkedorf in the comment thread they still look like pajamas from 99-cent stores.

If you want to keep up the pressure keep calling the Chancellor's office. If you are looking to contact the UCLA Chancellor's office to speak up against this joke uniform go here.There is also Dan Guerrero's office. The phone number for Guerrero's office is 310-206-6382. The simple message here is that if the UCLA officials in Murphy Hall and Morgan Center have any respect for the legacy of its basketball program, they will recycle of send back these unis to wherever Adidas shipped them from. Please be polite, respectful and concise in your calls. Check out JoeBruin's post on how it's done.