With two seasons under both coaches, let's take a look at what the stats say.

As every politician knows, if you can't sell yourself, then bad-mouth the competition. Since Enfield can't criticize the accomplishments of the UCLA basketball program without drawing attention to the utter ineptitude of Trojan basketball, he's left to attack our basketball program's style of play.

In fact, Dan Guerrero specifically mentioned style of play in explaining his choice of Steve Alford as the new Bruins basketball coach:

"Steve is the perfect fit for UCLA," said Guerrero. "He is part of the storied history of the game of college basketball and understands the tradition and uniqueness of UCLA. Yet he also connects with a new generation of players and brings an up-tempo and team-oriented brand of basketball to Westwood.

And while Howland had some success at UCLA, taking the Bruins to three Final Four appearances, Alford has already begun to make some changes from the old regime as the slow-paced offense of Howland, which often failed to showcase the talents of the Bruins' athletes, has been replaced by an up-tempo motion offense.

Of course the comparison to Ben Howland's notoriously deliberate offense sets the bar awfully low, but still, Bruins fans were being promised a change of pace--the ponderous offense of the Howland era was being replaced by Alford's brand of fast-paced basketball.

Did Andy Enfield somehow miss the announcement that the Bruins would be playing in a higher gear with Steve Alford in charge? If so, he surely must have realized the truth after his first game against UCLA.

But reality didn't seem to put the brakes on Enfield's claim to play fast, and with every loss to the Bruins, Enfield was reminded of his boast by UCLA fans, including the astute:

and the less astute:

Andy Enfield was right! USC must play faster basketball because their season is already finished and we're still playing.

So what led Andy Enfield to shoot himself in the foot with his claim that the Trojans would play faster basketball than the Bruins? Obviously he was horribly mistaken, right? Well, as Steve Alford might say, not so fast.

Fortunately it's straightforward to use statistics to answer questions about the pace at which teams play. Because a quicker tempo leads to more possessions per game, the average number of possession per game, or pace factor, can be used to gauge the speed at which a team plays over the course of a season.

For the purpose of this statistical analysis, I'm going to use data for the last three seasons so that in addition to comparing the tempo of Alford's and Enfield's teams, we can examine how much faster Alford's teams are playing relative to Howland's 2012-13 team.

The first takeaway from the tables is that Enfield's Trojans are indeed playing faster than Alford's Bruins, as the chart below clearly shows. 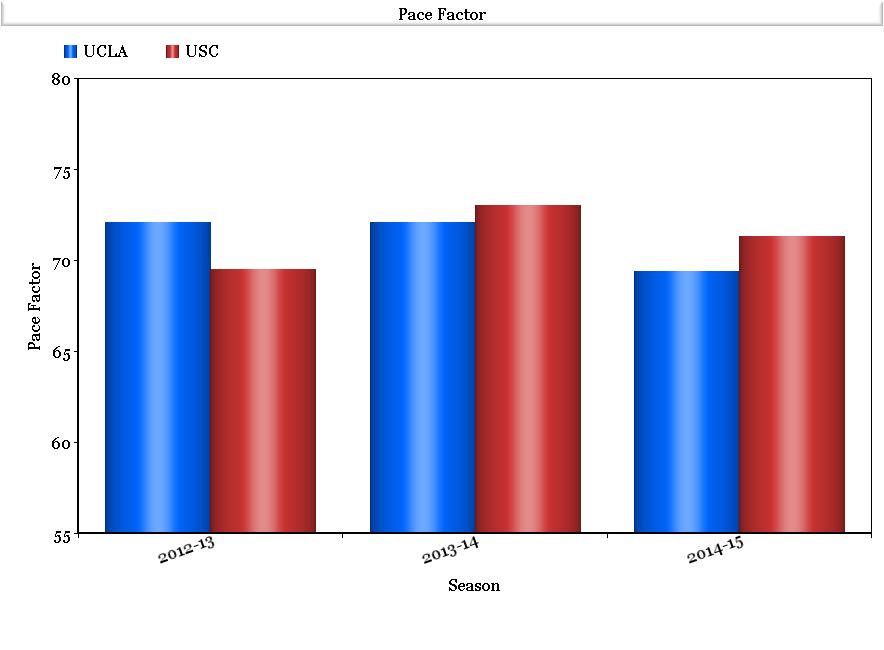 In Coach Howland's last season (2012-13), the Bruins were playing at a significantly faster tempo than the Trojans. Andy Enfield reversed that differential in his first season at USC, and he increased the Trojans' pace factor advantage in his second season at the helm. 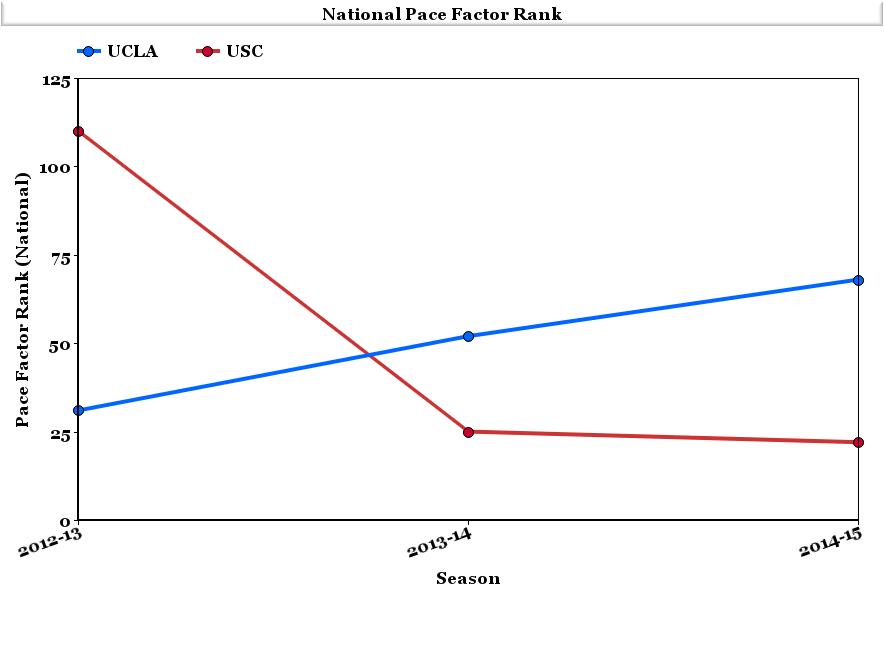 (Please note that a downward-sloping line corresponds to a higher national ranking.)

As the second chart shows, USC's pace factor improved dramatically relative to other teams in Enfield's first season. And although the Trojans' absolute pace factor decreased in Enfield's second season, USC's national rank improved (from 33rd to 25th) because teams were generally playing at a more deliberate pace in 2014-15.

Although I haven't plotted the data, the conference pace factor rankings tell the same story: Enfield's Trojans have led the Pac-12 in pace factor two years straight, while the Bruins have dropped from first in 2012-13 (under Coach Howland) to fourth in 2014-15.

So what are we to make of this? First and foremost, although the Trojans are indeed playing fast-paced basketball now, it's still bad, losing basketball. Some things never change.

Second, Dan Guerrero violated his own policy of "managing expectations" when he touted Steve Alford's "up-tempo ... brand of basketball." As was documented at the time of the hire, Alford has no history of up-tempo basketball. As Sports Illustrated noted two years ago:

[D]espite what Guerrero claimed, Alford does not bring an up-tempo style to Westwood. In his last 11 seasons, at Iowa and New Mexico (as far back as KenPom.com goes), Alford's teams ranked just once in the nation's top 100 in adjusted tempo. That was at Iowa in 2004. Only one of his six New Mexico teams was even in the top 150.

The fact that both of Alford's UCLA teams have played at a slower pace than Howland's final Bruins team indicates that Guerrero failed to hire a coach who was committed to playing at a fast pace.

For those inclined to give Steve Alford a break because he's been "stuck" with Howland recruits for two years (you know, the same guys who played at a faster pace with Coach Howland at the helm), you should review this video of Steve Alford at Pac-12 Media Day talking about what an athletic group he had for the 2014-15 season and how much those players want to play at a fast pace. Of course we now know that those players played at a slower pace than the team two years earlier that Ben Howland described as "not that super athletic."

At this point, I need to add an important disclaimer. I don't care if the team plays fast or slow. I want to see good, fundamentally sound basketball. I want to see effort at both ends of the floor. I want to see evidence of individual and collective improvement over the course of a season. I want to see players playing to the best of their ability. Therefore, to be absolutely clear about this, I'm not condemning Steve Alford for his teams' slower pace.

However, I believe in holding coaches and administrators accountable. Dan Guerrero promised up-tempo basketball, yet we've seen the a downward trend in tempo since Alford was hired. The easy assumption is that Dan Guerrero believes that fast-paced basketball puts fans in seats. Unfortunately, a request to find out exactly why he thinks an up-tempo offense is important received no reply.

Regardless, if finding a coach that plays up-tempo basketball was a serious consideration in Dan Guerrero's coaching search, then he should admit that he blew it in hiring Steve Alford.