It's Saturday morning and our Bruins will be heading back out to Spaulding in about an hour (at approximately 10:30 a.m.) for their seventh spring practice of the year. So, if you're in the greater Los Angeles metro area, it's a perfect opportunity to get out to Westwood, catch some practice, and roam the campus after, all on this lovely California sunny Saturday. If you do hit up practice, feel free to fire away with your comments, observations, and thoughts on what you see (especially for those of us trapped outside of Southern California).

With that said, today's practice comes at a bit of a somber time for UCLA, as former UCLA football captain Oscar Cabrera, an offensive lineman from 1997 to 2000, passed away at the early age of 35 yesterday (HT LA Bruin). Sadly, Cabrera was just one of many to succumb to the dreaded C-word, passing away from complications from mixoid lyposarcoma, a rare cancer. Our thoughts go out to his family and friends, especially his young children. Very sad.

In case you missed it, Coach Mora has been on fire on Twitter, answering a lot of questions, and had some encouraging things to say about our uniforms (stay tuned for more on that later), but most importantly, he's setting the proper tone, sending out this message this morning: 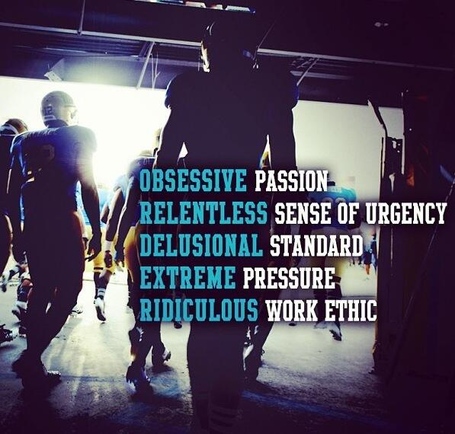 I think it's safe to say Coach Mora "gets it." I imagine his no-BS attitude is not going over very well with some of the entrenched, limp-wristed, lazy-ass Morgan Center old-timers, but this isn't tiddlywinks folks, it's Division I football. Now that he's shaken up the culture of the football program, let's see if he can get it done on the field.

So, with that, let's turn to our sixth spring practice of the year. If you need to check, the full spring schedule is here, with spring practice culminating at the Rose Bowl on April 27. If you're at Spaulding, fire away with your thoughts, observations, and what you see happening in the open thread.