Let's follow-up the good football vibes from Menelaus and BrendonBruin's posts with some more football notes on the frontpage. Menelaus pointed out that Bruce Feldman is projecting UCLA as a national champions contender in 2014.

Feldman is not the only one. Our SBN colleagues are projecting UCLA in the Fiesta Bowl (matching up against Baylor).  Of course they have Oregon as the Pac-12 champions (and no. 3 seed) in the Rose Bowl, which is one of the playoff games next year. But, Bruins will have something to say about that when the Duckies visit the Rose Bowl during the regular season. Still, it's a lot of fun to see Bruins in these discussions heading into next year.

Our SBN friends have also posted an early 2014 power-rankings for Pac-12 South Division. No one here will be surprised to see the Bruins at the top with 16 returning starters heading into next season:

Quarterback Brett Hundley's decision to return to college made Jim Mora's Bruins the team to beat in the South. Despite having to operate behind an inexperienced offensive line, Hundley finished third in the conference in passer rating last season and will have plenty of weapons around him moving forward, including five of his top six 2013 targets.

The Bruins return nine starters on offense, though the loss of top wide receiver Shaq Evans shouldn't be overlooked. An offensive line that started three freshmen for most of last season could be one of the best in the conference, even with first-team All-Pac-12 guard Xavier Su'a-filo leaving for the NFL. UCLA should also feature quite the mix out of the backfield with Paul Perkins, Jordon James, and linebacker-turned-tailback Myles Jack likely to split carries. Jack could be a darkhorse candidate for the Heisman if he gets enough touches.

UCLA will lose a considerable amount of talent on defense. Consensus All-American linebacker Anthony Barr heads to the NFL, with three other members of the front seven also leaving. Still, the defense should be solid enough to justify a preseason top-10 ranking, with Jack and former five-star lineman prospect Eddie Vanderdoes among those who'll need to step up.

The Bruins are also the South team likeliest to find an impact freshman, as they currently hold the division's top recruiting class on the 247Sports Composite.

And, speaking of starters here is a Heisman infographic from UCLA football's Facebook page on no. 17, which is going to be released on 17th of every month: 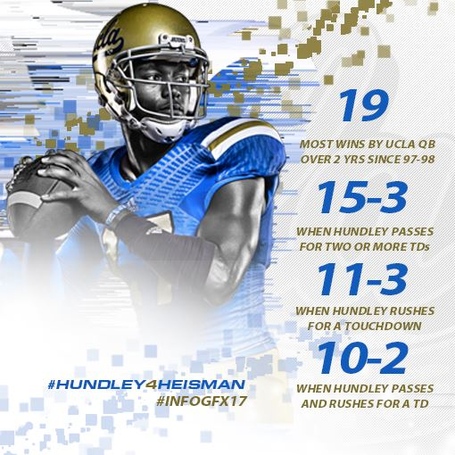 Elsewhere, good catch by bruin1999 in BruinBro's fanshot of an article re. Steve Sarkisian being noted by elite college football seniors as the worst new hire during this year's off-season. From a player survey in the senior bowl:

If you could play one more season of college football, but it had to be at a different school, what school would you choose?

I will end with closing arguments from Devin Lucien:

Thought I'd reinforce why it's so important to take advantage of a UCLA Scholly. I would, if I did it over again. pic.twitter.com/iaAK3cLUFw