BOOM! New York Jets Select Shaq Evans in the 4th Round of the 2014 NFL Draft

Shaq Evans will be heading to the bright lights of NYC, after being taken by the Jets with the 15th pick of the 4th round - 115th overall selection - in the 2014 NFL Draft. Congrats to Shaq!

Share All sharing options for: BOOM! New York Jets Select Shaq Evans in the 4th Round of the 2014 NFL Draft

The BOOM's keep on coming this morning for the Bruins! With the 15th pick of the 4th round, and 115th overall pick of the 2014 NFL Draft, the New York Jets selected Shaquelle Evans to help boost their receiving corps.

Along with Joe Fauria and Eddie Vanderdoes, Shaq is one of the growing number of players who have recently transferred away from or gotten out of commitments to Notre Dame to shine at UCLA. Despite playing his freshman year in South Bend and dealing with injuries throughout his first season with the Bruins, he finished his career in Westwood with 47 catches for 709 yards and 9 TD's in 2013. His 126 catches for 1,895 yards over three seasons are the 10th most catches and 13th most receiving yards all-time for the Bruins.

At the NFL Combine, Evans measured in at 6'1, 213 lbs, being one of the seemingly rare times when a school's notes accurately reflect a player's size. Heading into the Sun Bowl at the end of last season, Ralph Irvin talked with Shaq for UCLABruins.com about his career at UCLA. It is a nice interview, along with a breakdown of some of his highlights.

Speaking of highlights, here are a couple of videos from his time at UCLA. Here he is digging out a low pass from Brett Hundley from last season's Cal game (via ESPN).

Harris HIghlights has put together an extended highlight video of Shaq.

During Senior Bowl week, he talked with FoxSports.com's Annabel Stephan about his time at UCLA, playing for Jim Mora and how he was preparing for the draft.

Congratulations to Shaq as he takes the next step toward his dream of earning his way into the NFL! Also congrats to the Jets, who have just added a hard working, quality receiver to their roster. 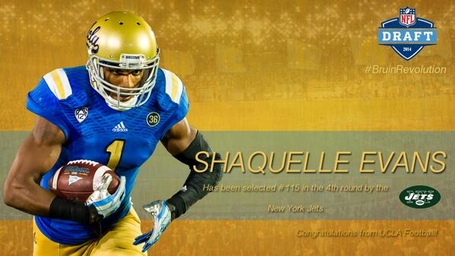