The Clown Show across town continues, as a Southern Cal player quits the team days before the season opener and calls his head coach a racist on the way out.

Just when you thought the week couldn't get any worse for the Southern Cal Clown College, things really start to get crazy. This morning, senior RB/DB Anthony Brown quit the USC football team during a meeting with Steve Sarkisian.

Sark shared the news with the media during his morning press conference, but it was Brown's airing of grievances a few minutes before that really got those reporters' attention. 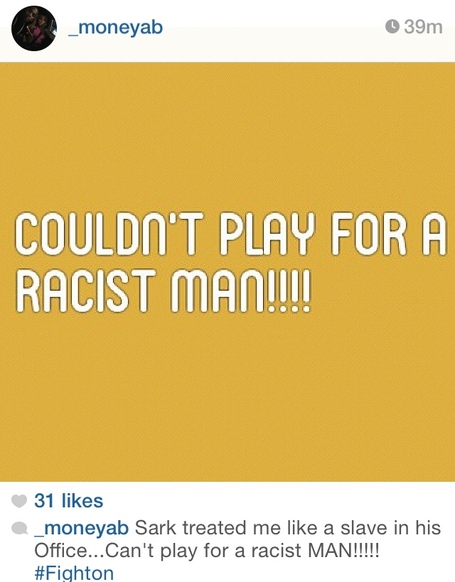 Once that post went up, the writers covering the SC football beat - along with some national writers - moved fast. The Big Lead wrote their treatment, the SBN mothership took a more balanced approach, while TMZ Sports has used this as a way to pile onto the guys across town even further. Sarkisian was shocked to hear of Brown's feeling during the meeting and of that serious accusation.

Sarkisian on Brown: "I had encouraged him to play. I thought he could play. I didn't want him to quit." He was blindsided by "racist" post.

As CBS Sports is reporting, some of the remaining Southern Cal players have already begun speaking (or tweeting, as it may be) up for Sark, calling Brown's allegation of racism untrue. As much as I love seeing troy burn, I genuinely hope those players are correct, and there is nothing to all of this. Racism has no place in this game on in society, and I trust that the folks across town feel the same way. In fact, there may already be an explanation per Reddit.

True or false though, this is the last thing the Trojans needed in the final days leading up to football season. As Bruce Feldman tweeted just a few minutes ago:

#USC players have: 4 HCs in the past 12 MOs; seen a tm captain publicly go from hero to punchline & had a new HC called a racist by a player

Not the way to inaugurate a new era of football...

Update: TMZ is reporting that they have contacted Brown. According to their article, Brown said:

I called a meeting up with this disrespectful guy!!! He called me a coward, all types of f**k words.

He stereotype my mom and dad. like he belittle me to another level.

I just responded Yes Sir and No Sir!

Never been treated like that before!! Don't Wish it upon anyone! That's who he is!